According to the counter on the left-hand side of the page, the blog has clocked over 10,000 page views. I'm also pleased that people find the content on my YouTube Channel interesting. Currently, it has 331 subscribers and is slowly growing. It's not the numbers that are important, but that people find something enjoyable in the content.
Thank you to everyone who has visited. It's great knowing that people can share the enjoyment of a great hobby, even though we'll likely never meet in person.
I've not had much time to work on the layout in the last month or two. However, I have taken some more photos of various scenes. I've also updated the banner on the blogs front page. Most of the locomotives on the old banner have since been repainted or replaced so it was in need of an update.

Posted by Luke Blackbeard at 7:42 pm No comments:

What's in a name? - How and why I named my locomotives

All the locomotives on my railroad, bar one, have names. I've always liked the practice of naming locomotives rather than simply numbering them.

Railroads were, and continue to be, in competition with each other for passengers and freight. Retailers today entice customers with a well-presented shop front or with an easy to use website. Before the turn of the 19th century, locomotives were part of the 'shop front'. They were highly visible (and audible) advertisements for your business. Subsequently, the railroads took pride in their locomotives making sure they were kept clean and shiny. Naming locomotives was a way of adding personality and a story to your business. Accordingly, names often involved some form of superlative image of elegance, strength or speed.
As railroad empires grew in size, the practice of naming locomotives became increasingly difficult. Administration could become confusing if a name was reused. Perhaps grand names were open to the possibility of ridicule if they didn't live up to their name. For example, if a passenger locomotive named Cannonball came in late or a freight locomotive named Goliath failed to make it up the grade the irony would not be lost on the public at large.   Eventually, naming locomotives was dropped in favour of simple numbers, along with their colourful victorian era liveries, which were exchanges for the all too familiar black.

I have six locomotives, and while from what I can see naming locomotives seemed to have fallen out of favour by 1895, I like the story it tells and the personality it brings to the railroad. So I continue the practice, arguing that the Thoroughfare Gap Railroad is small enough for naming locomotives to continue to be practical.
All the locomotive names on my railroad were once used by the Central Pacific Railroad, and are taken from a copy of their 1968 locomotive roster, which I've included below. (Full resolution can be found at the CPRR Museum website here. You can see that towards the end of the roster they started to run out of inspiration for new names and began using slight variations of the same name! 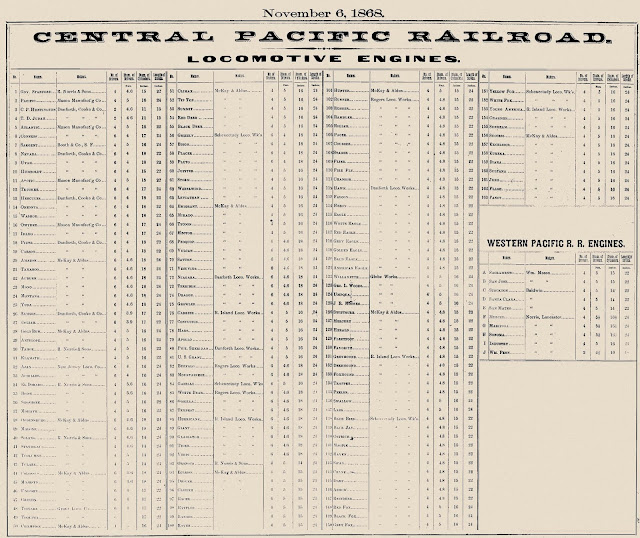 I decided to pick names from this list to try and keep a degree of authenticity in naming conventions for that period. Ultimately, I picked names that appealed to me, but there was some personality involved in the choices.
The only locomotive not named is, of course, 119. I have not been able to determine if at any point the Union Pacific named its locomotives. But certainly, by 1869 they were using numbers. As my model represents 119 as we think she looked, I've simply retained her number.
Have you named the locomotives on your railroad (officially or unofficially) or can you recall seeing or riding any named trains like the 20th Century Limited (USA) or the Night Limited (NZ)? Please feel free to share in the comments below.
Posted by Luke Blackbeard at 10:08 pm 5 comments:

Some time ago I found an IHC maintenance of way (MOW) set for sale second hand. The cars were all different colours and road names. I've always liked grey MOW cars so repainted and detailed them.

I kept the IHC trucks but replaced the wheelsets with Walthers Proto 33" wheelsets. I probably should have replaced the trucks too, as they are not the best. Even tuning with my MicroMark truck tuner hasn't made the wheelsets roll as freely as I would like. However, the train still rolls pretty well, stays on the track and doesn't spend a lot of time on the layout, so it's not really an issue. The one drawback is that several of the cars are very heavy relative to my other rolling stock. I find that the Jupiter and 119 cannot pull a full MOW train up my grade. In the future, I may put a couple of cars on a diet and remove some of the weight.

The train is made up of a blacksmith car, complete with forge and a stash of tools. A rail and tie car, a derrick car, and a gondola with ballast. Add a flat car to the mix and you have everything you need to respond to a wreck or maintain the tracks.


Posted by Luke Blackbeard at 4:00 pm No comments:

Turn of the century modeller, Don Ball, has a fantastic layout set in California in 1895. You can check out his blog here. Don is a prototype modeller and his work is exceptional; his layout has been featured in Model Railroad Hobbyist and the Railroad Model Craftsman publications.

Don's Stockton and Copperopolis Railroad features several oil depots and tank cars. Oil traffic was something my layout was lacking. While you can't have it all, I liked the look of what he had done and a few months back I went about adding a scene to the layout.

Don had modelled part of an oil distribution centre on the edge of his layout (see page 10 of the MRH layout article linked above). I had an area at the end of my team track that was underused where I could try something similar, but less detailed. I built a fence around the area for the depot with gates and made a sign, based on the one on Don's layout.

The tanks themselves were from MDC old-time tank car kits. I painted and recalled them for the Union Tank Line and mounted them on 30' flat cars. Gloss black paint made good authentic-looking oil spills. Since taking the photos below I've added oil spills on the ground and made the area look a little more 'used'. Overall, I'm pleased with what it brings to the layout in terms of interest and operations.

Modelling only part of an industry or structure can be a good way to make the layout seem larger than it is. Have you used this technique on your layout? 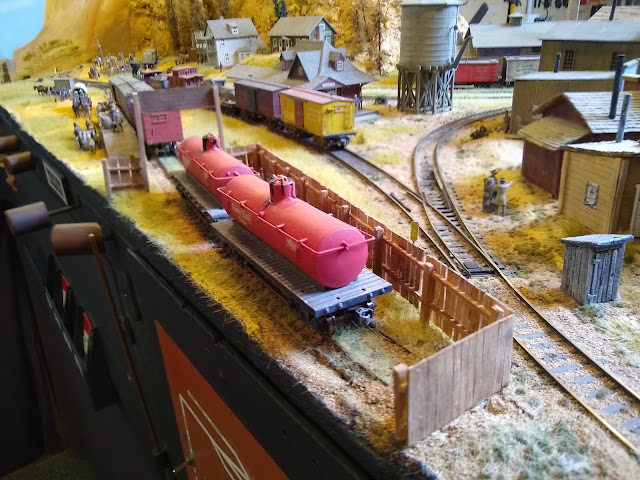 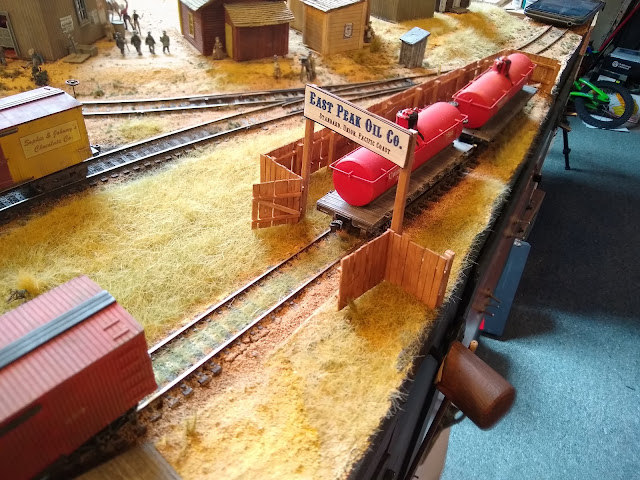 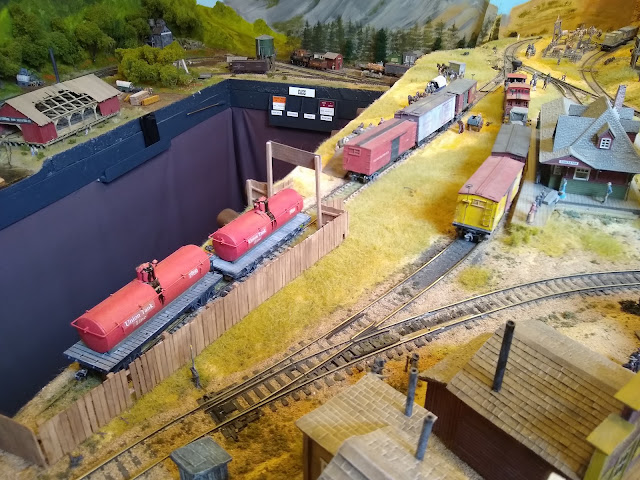 If you've watched everything on Netflix and YouTube during the COVID-19 lockdown, then here is another video to help with your train fix.

The company photographer spent the day on the other side of the canyon with one of Mr Edison's new moving picture cameras. It was an effort to drag the equipment up there. But it was worth it to capture the several trains grinding up the grade and over the two bridges to Thoroughfare Gap, on their way to Teresaton.

Posted by Luke Blackbeard at 10:35 am No comments:

Like the rest of the world, New Zealand is still in lockdown in response to the COVID-19 pandemic. Having the whole family working and schooling from home has been a challenge, but we have had a lot of fun together on the way.

Because things have been busier, I have not had a chance to do any work on the layout. However, before COVID-19 arrived here in New Zealand, I was fortunate to host about 10 members of the Southland Society of Model Engineers. Their club is based in Invercargill, about 45 minutes drive from where I live. They have a nice club layout at their clubrooms and many of the members have layouts as well. You can find them on Facebook here. They're a great bunch, so after the COVID-19 lockdown, look them up and say hello.

It was great that everyone seemed to enjoy themselves. Some made themselves busy finding the figures and scenes listed on the layout "where's Wally" scavenger hunt list. Others took some time to railfan the various trains running. On the day the layout seemed to behave itself and I was pleased the only derailment was caused by me not paying attention and running the wrong way through a switch.

While the layout has hosted visitors before, I've never had more than a couple of people at a time. So this was the largest number I've fitted in the garage. Luckily, it was a reasonable day so I opened up the main garage door and also moved the car out. To help with capacity in the narrow aisle, I had bench set up on the other side of the room with a photo book featuring the layout construction and a slideshow with photos of my Dad's 28mm wargaming figures on his dioramas. So people had things to look at if they couldn't find a spot around the layout.

It's always good fun to share the layout, especially with such a great bunch of people.

Many thanks to Greg Fordyce for the photos. 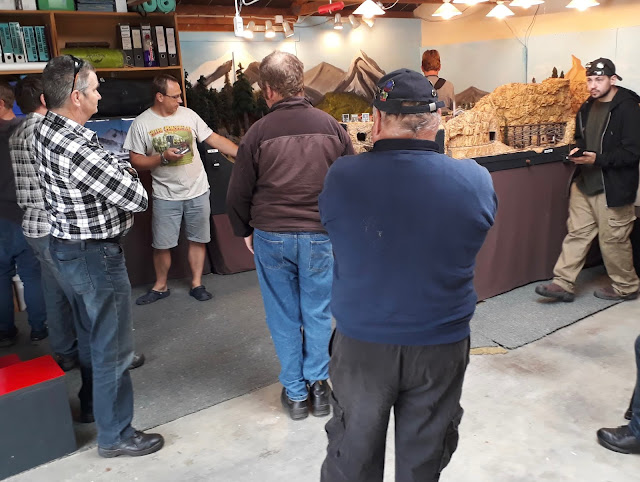 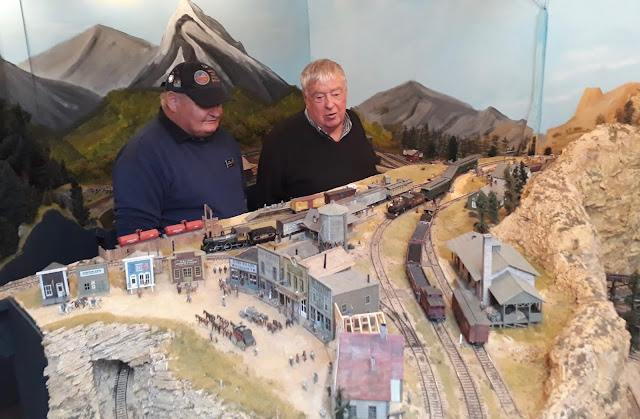 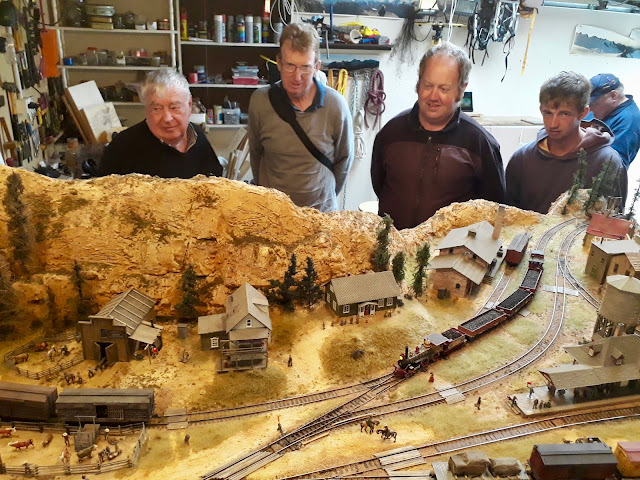 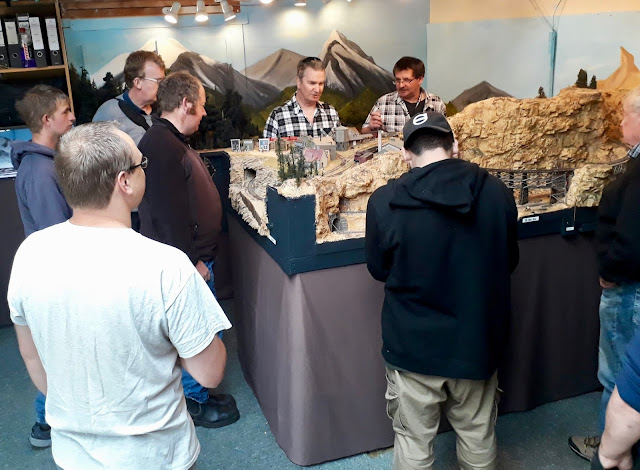 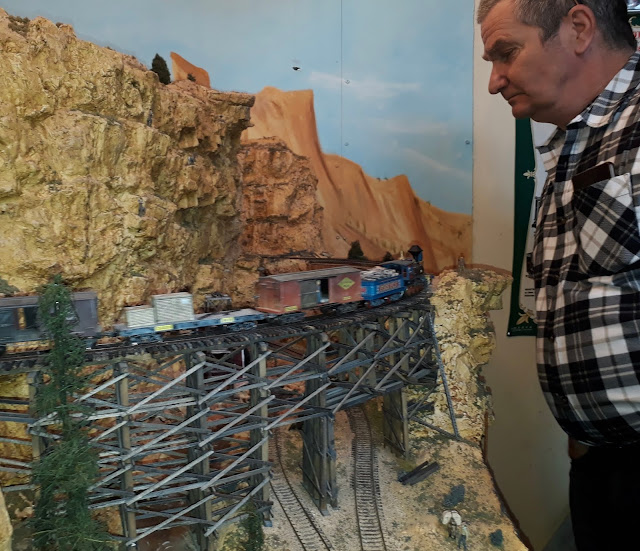 One of the signature features of my layout is the sawmill near Cass, which I started in 2016. However, this scene has never been completed. There were several key features missing. Without them, the scene looked a little silly as there was no way to unload the logs from the trains into the pond, get the logs from the pond into the mill, and get the sawn timber out of the mill to the drying and sorting yard.

Finally, the I go the motivation to complete the scene and now Dean's Lumber and Millwork Company has a Jill poke to unload logs, a log chute with chain winch to haul logs into the mill, an extended deck out the other end of the mill, to support the tail end of the dead rollers and a car loading platform for loading finished lumber onto trains.

The interior of the sawmill is detailed with 3D printed model purchased from DonVA's Shapeways shop, Fine Scale Models. Don has done a superb job with his sawmill interior models and it was a pleasure to add it to my mill. Unfortunately, the logs in my pond (made before I had the interior kit) are a bit longer than Don's log carriage. Normally, the team in the woods would buck the logs to the appropriate length. However, I was not going redo my millpond scene, so I scratch built a large circular bucking saw to buck the logs in two on the log deck before logs reach the main double saw breaks them down into slabs. I'm not sure this is prototypical, though I did see at least one photo of a large circular bucking saw in use but, that may have been from a later time period. Nevertheless, the bucking saw adds a little bit of believability that the mill can handle the longer logs sitting in the pond.

I also redid the overhead lights in the mill so that viewers looking at the side of the building had a better view of the interior.

I'll add some bark chips around the Jill poke and other details in due course. But for now, I think I can now saw the scene is largely complete.


Posted by Luke Blackbeard at 4:59 pm No comments:

A blog about the design, construction and operation of Luke Blackbeard's HO Scale Thoroughfare Gap Railroad. The line is set somewhere in the American west around 1895 - 1900.